Animals and pets in disaster preparedness 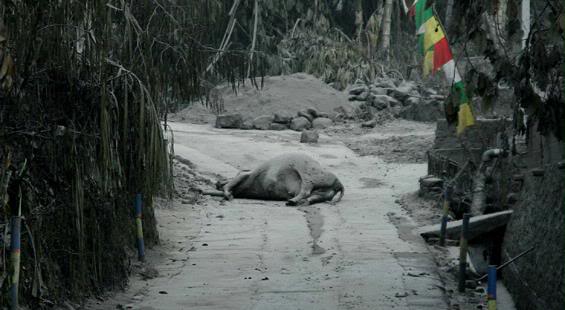 On the 21st & 22nd of July 2018, Abhirama “Abhi” Perdana represented SGM in a collaboration event with Animal Friends Jogja (AFJ) as a part of their “Sowan Ngupi” program (Sohib Hewan Tangguh Merapi, or the Resilient Animal Friends of Merapi). The main concept of this program is to increase the capacity of those living in high risk areas of Merapi to be more aware, ready and prepared to rescue their domestic animals in the event of a disaster. “Based on AFJ’s research during the 2010 eruptions of Merapi, many animals were left behind and in order to save them, volunteers had to struggle on a daily basis in high-risk situations on the slopes of Merapi … (Sowan Ngupi’s aims are to)  empowering and helping Merapi’s residents to be prepared & minimizing the dangerous threat on their beloved animals,” (Source: Instagram @animalfriendsjogja).

Here, Abhi reports on his experience of taking part in this activity together with volunteers of AFJ.

On June 21st-22nd Animal Friends Jogja (AFJ), in collaboration together with SGM created a special two day event to collect data and run workshops and socialization events on the topic of animals in disaster mitigation. It can be said that topic is something relatively “new” for all the relevant stakeholders, with the experience of the Merapi eruptions of 2010 that created awareness for AFJ that the rescue and handling of animals, especially during evacuation and placement in shelters is also incredibly important and valuable. AFJ carries out a workshop explaining how to handle and care for animals during evacuation and when in an evacuation camp. Sosialisasi mengenai cara menangani hewan dalam proses evakuasi dan ketika di shalter untuk orang dewasa.

For many villagers of Merapi, of which Pangukrejo is certainly no exception, cattle are a vital and valuable asset. It was by no means a small loss when following the recent phreatic eruptions of May and June 2018, local farmers felt pushed to panic sell around 30 cows for well below the market value. Those effects should be considered together to find solutions. The activity initiated by AFJ is also a pilot project, which is expected to produce a masterplan about the mitigation of animals that could be used in other areas. It is hoped that this could become a vital part of disaster planning, with the overall goal to minimize all possible losses both materially and psychologically whenever an increase in the level of Merapi’s status may occur, or when panic may occur in the community. Workshop with kids about why and how best to care for animals. Sosialisasi mengenai cara merawat dan melihara hewan dengan baik kepada anak-anak.

The activity by SGM and AFJ done were carried out not only with the adult members of the community, such as the data collection on animals in Pangukrejo, but socialization and an awareness raising workshop was also done for the younger members of the community. The event began with the screening of a short video of animals in bad conditions during the eruption times and in the evacuate camps, so as to cultivate children’s concern for animals especially pets, with the hope that these young people can become leaders in animal welfare. In the event of an evacuation, they may be more ready and feel responsible for making sure their pets and animals are cared for. “Now imagine you have to be in this cage for days and days – how do you feel?” Monique explains how important it will be for them to play with their animals if they have to be caged for long periods of time in the evacuation camp. “Bayangkanlah Anda yang harus di dalam kandang ini untuk berhari-hari, bagaimana perasaan Kalian?” Monique menjelaskan pentingnya sering mengunjungi dan mengajak hewan peliharaannya main ketika ada di dalam kandang.

Further more, it is hoped that we can foster a culture and understanding of disaster resilience from a young age and therefore ensure that this crucial mindset and knowledge is passed on to the next generation.

Thanks so much to all the AFJ team and volunteers for their support and taking part in this event, especially to the wonderful and crazy organisers, Ina, Among, Lolita, Monique and many more for their passion, enthusiasm and patience. On behalf of all of the SGM team we are very sorry for any part of the event that may have felt lacking. 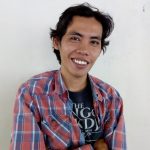 Abhirama Perdana, or ‘Abhi’, is an undergraduate student at APMD (School of Higher Education for Rural Community Development). He is currently in his final term of Media and Communication Studies, and hopes in the future to become someone “who can be beneficial to other people and the environment”.

Abhi has been a volunteer teacher at SGM since the start the 2017 where he and fellow student Endah Tofani, began our Dance and Performing Arts class with the aims of cultivating an artistic and creative spirit in the hearts of our students.

For any queries, Abhi can be contacted by email via: